How does a typical fighter’s training compare to athletes of other sports? 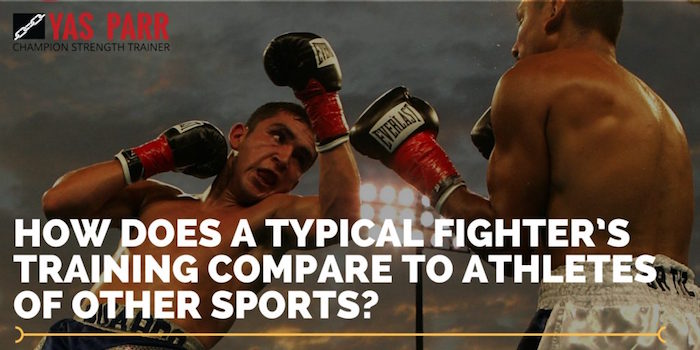 When certain people see something written about S&C improving a fighter by making them stronger and faster they will argue their case about technique, leverage etc. Nobody thinks that making someone more powerful will turn them into a high level fighter if they are not already proficient. The fact is no matter what level someone is at in relation to technique, improving power will make that individual better than they themselves previously were.

If someone was to look at the strength & conditioning of an MMA fighter there is a chance that they would be impressed, obviously not all fighters, but there are some fighters out there that are on the ball when it comes to their performance training. There are excellent strength coaches working in the sport and because the sport is relatively new then both coaches and fighters are keen to embrace and learn any training concepts that can take them to the next level.

The observer watching the training of a fighter that does have a real Strength & Conditioning Coach would see periodized programs working on body composition and correction of imbalances, improving strength, energy system work and training to increase Rate Of Force Development (RFD).

If the same person was then to look at how 99.99% of combat athletes from other sports/disciplines train they would see a totally different picture, mainly because they are so old school and so something is done because it always has been.

It does seem that times are changing though as far as western boxing goes dependent on geography, British and Eastern European boxers are stepping up their game and are training to become much more powerful, they now seem to have got the message that training to improve power takes them to another level while their American counterparts are still swimming and doing 10 mile runs while in camp.

There may be a shortage of top Australian boxers but those that are doing the business also seem to be employing high quality strength and conditioning coaches that know better than to have their fighters doing out of date training that has no benefit to performance enhancement.

Because boxing, Muay Thai etc. are so ‘old school’ in terms of the philosophies in the sport in regards to training then it’s difficult to bring the programs up to a level where they are comparative to other elite level athletes. It’s quite shocking when you consider what’s at stake in terms of potential serious injury or even death and also the vast sums of money that are involved in these sports, boxing especially.

For those combat athletes that are ‘skinny fat’, usually due to poor or a lack of strength training coupled with excessive aerobic work, being in better condition would mean that the fighter could either come in lighter by retaining the same level of muscle but be leaner. Or they could fight at the same weight by replacing the excess fat (useless weight) with high quality functional muscle.

Trained correctly, a fighter that is in good shape with a low body fat % can easily still become lighter but also at the same time stronger by focusing on Relative Strength and increase explosiveness once a good foundation of strength is built by training for an increase in RFD. Generally these fighters have resistance training experience but it tends to be of the type seen in a typical gym performed by non-athletes.

There are still old school boxing trainers around that have their fighters doing absolutely no strength training, they believe that the best conditioning for a boxer is standard boxing training in the gym combined with long steady paced runs early in the morning. These trainers imagine that if I fighter is lifting weights, even if done correctly, that he is bodybuilding. There is a massive difference between bodybuilding and strength training for increased athletic performance. What if a fighter can fight at the same weight but be faster and much, much stronger? Everyone in the fight game talks about power, the definition of power is force x velocity.

Strength training will improve power in the untrained/moderately trained athlete so just by increasing strength power will also increase.

There are fighters who do understand that they need to do strength & conditioning but the majority of these guys are way, way behind where they should be. Doing battling ropes or a little weight training programme in a commercial gym or in the local park really isn’t the level that any combat athlete never mind a potential world class fighter should be at. It is pleasing to see an effort being made by those that want to progress using methods such as Modified Strongman Training (MST) but there is still a lack of understanding in how it should be programmed and also what correct technique actually is.

Another problem with the training of the majority of fighters is their road work which is usually a long sub-maximal run. During a bout/match a fighter does not perform at a continuous sub-maximal intensity non stop for 30+ minutes, it’s the complete opposite. Some fighters even run 10-15 miles a day with the belief that if they are conditioned to last longer they can’t go wrong. The goal should be to be a super human for the duration of the fight not a low level long distance runner, a fighter should not practice being proficient at 90 minute sub-maximal runs to be powerful for a much shorter time frame.

However it would also be a HUGE mistake to think that no specific aerobic conditioning should be done and that HIIT will take care of everything. It is very true that the aerobic system will become better conditioned from performing intervals but and it’s a big but, it is aerobic power that will improve not aerobic capacity. When the tempo is slowed down, the fighter who has not specifically trained the aerobic system will feel like he/she is dying. However good you think you are, there is always someone who can change the pace of the fight and slow it down or speed it up, taking it out of your hands.

Boxing is largely an anaerobic sport, it’s high intensity bursts of fast combinations, the slower component between these intense bursts is the aerobic part of the fight. Combat sports such as Muay Thai, MMA, BJJ do require great strength and the ability to be explosive to compete at a high level but the longer the contact is between combat athletes the greater the aerobic demand. Grappling obviously does involve contact for much longer time periods but even the clinch in Muay Thai means contact between the fighters is much greater than in western boxing.

An aerobic base is definitely required by any fighter. What most do incorrectly is still performing these long aerobic runs during camp, this is the time to become powerful. A fighter will always have a good aerobic base because there is a very good chance that throughout their career they have done way too much aerobic work, unless for some reason they haven’t ran for a long time, but still this fighter would get the base back in a matter of weeks. Once the base is built only maintenance is required, once a week max is all that is needed. The traditional way of carrying on with the daily long runs during camp will massively hold back the development of power. The opposite is also true, when the goal is creating exceptional aerobic fitness, training for power gains will hold back the process.

A S&C coach working with a fighter should be able to identify the key factors that affect strength, power & performance and the principle adaptations that occur in these systems as a result of a strength and conditioning programme. It’s the coach’s job to identify the key fitness components of the sport/art and analyse the optimal methods to elicit positive adaptations in these systems. The competent S&C specialist will integrate fitness components resulting in adaptations in strength, speed, power, endurance, agility and flexibility. A grappler’s training would be in many ways different to a stand-up fighters and the coach of an MMA fighter would need to combine what each does to make a more rounded fighter, if done correctly the performance training of an MMA fighter can be more difficult to get exactly right, but that is the big statement IF DONE CORRECTLY.

After performing an individual analysis of the fighter the coach needs to then program, monitor, evaluate and finally adapt. A program has to be written with the end in mind, starting with a needs analysis so that there is a base for evaluation. The needs analysis looks at the sport and at the fighter as an individual, at his/her training age, physical capacities, stress tolerance and psycho-motor skills.

A fighter should work on strength performance:

Starting Strength – the ability to generate maximal force at the beginning of a muscular contraction.

RFD – measure of the rate at which force is developed.

Relative Strength – maximum force that can be generated per unit of body-weight.

The training must be specific, it must replicate the demands of the sport and there must be a high degree of transfer.

Kinematics – Description of motion. Direction and range of movement, speed of movement and muscles involved.

Kinetics – Relationship between forces and movement. Which muscles and the recruitment pattern. Force patterns e.g. RFD.

Mobility – The ability to move easily and without restriction.

When training for performance and not aesthetics certain principles should be used.

When choosing exercises to improve combat performance they must be those identified in the needs analysis. For example it’s a safe bet to use the BB bench press, incline BB bench would be an even better choice as the angle would be closer to the angle of the body when throwing a punch and incline DB bench would be better still because the stabilizers of the shoulder joint would be worked more. Although maybe not an obvious choice, the standing overhead BB press would also be an excellent exercise for the simple fact that it is floor based and power is generated from the floor. This is also the reason why boxers should never neglect leg training.

Sometimes isolation exercises may be written in a program to correct an identified imbalance but generally multi-joint, compound exercises are most productive. A fighter’s program should be built around a few key primary exercises and their variations which have been identified in the needs analysis.

Explosive exercises such as Olympic lifts should always be first in the workout. Large muscle groups should be trained before small and multi-joint before single-joint.

Strength is always the mother quality, if a fighter has high strength levels then everything else is easier, he/she is always working at a lower % of their maximum. Also when there is a good base level of strength then the fighter’s RFD can be focused on, resulting in great power.

Yas has been in the health & fitness industry since 1996 and has been a strength & conditioning coach since 2005. He has a BSc in Sports Performance (Hons) and many certifications in Strength & Conditioning, fitness and nutrition. Experience includes training trainers, royalty, executives and athletes from child to adult Olympic and professional. He did his degree at an Academy of Sports Excellence in the UK under the tutelage of Professor Ian Jeffries PhD which enabled him to not only gain academic knowledge but also the experience of working with elite athletes on a day to day basis while learning from world class coaches. In 2006 Yas flew to the Olympic Training Center in Colorado Springs to take USA Weightlifting’s ‘Sport Performance Coach’ certification.

He currently is lucky enough to travel the world teaching for the Poliquin Group.