Effectiveness and Efficacy of Suspension Training 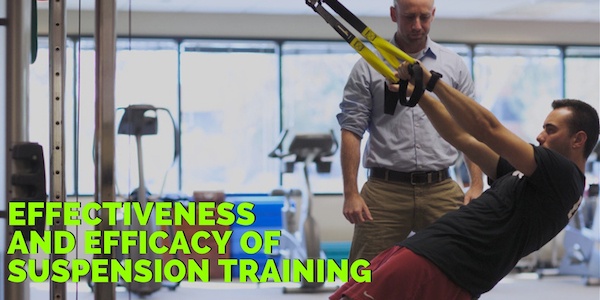 In this blog post we’ll examine the effectiveness and efficacy of suspension training. Efficacy is defined as the ability to produce a desired or intended result, for example “there is little information on the efficacy of this treatment.” Conversely, Effectiveness is defined as being successful in producing a desired or intended result, “effective solutions to environmental problems” for example. However, when it comes to science and research the two words have more specific meanings. Efficacy is a measure of whether or not something works whereas effectiveness is concerned with whether or not it can be used practically. That is to say, that there are many things (tools, treatments, etc.) that are efficacious but due to their cost in dollars,  time or other factors, they may not be practical to use or be effective in practice.

One study published by the Journal of Strength and Conditioning Research found that “abdominal muscle activation was higher in all suspended conditions compared to the floor-based plank” (Byrne et al., 2014). This is in line with the marketing and purported benefits of suspension training. The study found specifically that “the highest level of abdominal muscle activation occurred in the arms suspended and arms/feet suspended conditions, which did not differ from one another” (Byrne et al., 2014). Some amount of instability or suspension is beneficial but more is not necessarily better. The study also found activity in the two joint quadriceps muscle that crosses the knee and hip joint, and in an important shoulder/scapular stabilizer the serratus anterior. “Rectus femoris activation was greatest during the arms suspended condition, whereas SA activity peaked during normal and feet suspended planks” (Byrne et al., 2014). The researchers concluded the “results indicate that suspension training as performed in this study seems to be an effective means of increasing muscle activation during the plank exercise. Contrary to expectations, the additional instability created by suspending both the arms and feet did not result in any additional abdominal muscle activation” (Byrne et al., 2014).

The protocol in the study consisted of performing two repetitions, each of four different plank exercises for 3-seconds each, three of which were using a TRX Suspension System:

21 subjects participated and the muscle activation was recorded from rectus abdominis, external oblique, rectus femoris, and serratus anterior (SA) muscles using electromyography. In practice, trainers and exercisers tend to hold the plank position for more than 3-seconds which brings up the question of what happens as the person holds the plank suspended or unsuspended for a longer time and how applicable are these results if in practice the plank is held for longer periods.

Another study by the Journal of Strength & Conditioning Research found that four inverted row exercises activated the LD (latissimus dorsi), UT (upper trapezius), MT (middle trapezius), LT (lower trapezius, and BB (biceps brachii) at levels conducive to strengthening (Youdas et al., 2016). This seems to show that a suspension training apparatus, in this case a “portable pull-up device” is an appropriate substitute to free weights for creating the resistance necessary to build strength. 13 male and 13 female subjects participated in the study. Interestingly, the investigators reported “no statistically significant differences in muscle activation existed between single- and double-leg WB (weight bearing) in any muscles” (Youdas et al., 2016).

When examining push exercises researchers found that “in general, the instability associated with the labile exercises required greater torso muscle activity than when performed on stable surfaces” (McGill et al., 2014). The researchers also found it interesting that a standard push-up showed significantly greater shear than TRX angle 1 (p = 0.02), angle 2 (p = 0.01), and angle 3 (p = 0.02) (McGill et al., 2014). This study used kinematic analysis of body segments and muscle activity in a 3D model of 14 men to estimate muscle force. They compared exercises performed using stable surfaces for hand/feet contact and with labile suspension straps. A metronome was used to control the speed of movement for each exercise.

To quantify the load at different angle of the push-up, another study used 28 male subjects and compared forces during push-ups at four different body angles (0, 15, 30, 45°) while using a TRX suspension training device (Gulmez, 2017). The results showed that “as the TRX angle was reduced, the load applied to the TRX straps increased…” (Gulmez, 2017). This was true during the concentric and eccentric phases of the exercise, (e.g. for both the elbow joint changing from flexion to extension and vice versa). The greatest forces were recorded at 0°. Forces equal to 50.4% of the subjects body weight were recorded when their elbows were extended and 75.3% of their body weight when the subjects elbows were in the flexed position.

Next, a study that tested electromyographical output during pike variations with and without instability devices. This study found “significant differences between the instability devices and the stable pike. These results indicate that with more freely moving instability devices (e.g., suspension device, Swiss ball, etc.), core musculature may require greater muscular demands” (Snarr et al., 2016). The study compared the EMG results of 20 men and women performing 5 variations of a pike on varying surfaces –

Two additional studies looked at the influence of suspension training on hormone responses. Both these studies – Effects of Suspension Training on the Growth Hormone Axis and Anabolic Hormonal Responses to an Acute Bout of Suspension Training were published by the Journal of Strength & Conditioning Research. It should be additionally noted that both studies (both similar in protocol) were funded by The Citadel Foundation and Fitness Anywhere, Inc. (Fitness Anywhere is the parent company of TRX). Both studies used a 60-minute suspension training interval workout that consisted of 23 exercises performed for 30-seconds each followed by 60-seconds of rest. The results of both studies showed positive increases in hormone levels similar to those achieved in high intensity circuit type training with free weights or other modalities. The growth hormone study concluded that the “data indicate that a suspension training workout using the recommended 30-sec/60-sec work:rest ratio is sufficient to stimulate the GH axis in recreationally active young adult males. Practical Applications: This evidence supports the use of suspension training as a stimulus for anabolic hormone release, suggesting this is a viable alternative to traditional resistance training for stimulating the anabolic hormones that support recovery and muscle growth” (Dudgeon et al., 2011). The anabolic/testosterone study concluded that “a suspension training workout using 30-sec work intervals followed by 60-sec rest periods elicited typical TT, and novel T:C ratio responses to moderate intensity resistance training in physically active males. Suspension training appears to stimulate an expected testosterone response with a lower associated stress (i.e. cortisol) response resulting in a positive anabolic profile lasting at least two hours after the workout. Workouts using 30 sec work and rest intervals, 45 or 60 sec work and 30 or 45 sec rest intervals may likely result in more robust hormonal responses” (Scheett et al., 2011). Both studies state that their results support “the use of suspension training exercise as a viable alternative mode of exercise to traditional resistance training” (Dudgeon et al., 2011 & Scheett et al., 2011).

When compared to needing a gym with hundreds of thousands of dollars worth of equipment, it’s clear that the use of suspension training apparatus can be effective as well as efficacious. When compared to a calisthenic program that uses full pull-ups and handstand push ups, the suspension trainer can be a way to regress or lessen the loading for those not able to perform full push-ups, pull-ups or other body weight exercises. Suspension training straps can also be a way to assist lower body exercises like squats or single leg squats making them accessible to those that cannot yet perform them with their full body weight.

However, when looking for a place to suspend a suspension trainer, the effectiveness of the products is not as great as imagined. Note that there are many anchoring systems and frames sold to allow one to use these suspension devices in the gym and a class setting. As a person that lives in an old house (see video), the door mounting devices also fall short in utility because I don’t have room in the hallways to use the devices.

As debates continue regarding open chain vs. closed chain exercises, stable vs. unstable surfaces, and functional vs. aesthetic exercises, it’s also interesting to note the differences between object manipulation and body management skills. Body management, object manipulation and locomotion skill are the three areas of physical literacy. Suspension training clearly falls under the body management category but doesn’t satisfy the object manipulation or locomotion skill categories. In my professional opinion, suspension training shouldn’t be the only source of resistance exercise in a program but a tool within a personal trainer’s toolbox that can be utilized when needed.

Vincent is the Dean of Advanced Personal Training at the Swedish Institute and the Director of Education for Kettlebell Concepts in New York City. After a few years working in corporate fitness and receiving his Diploma and License as a Massage Therapist, he began teaching at the Swedish Institute where he developed and runs the Advanced Personal Training Program, the first personal training degree program in Manhattan. In addition to maintaining a private massage therapy practice and personal training business where he works with track and field athletes, Broadway dancers and fitness clients, Vincent is the creator of the FCES (Flexibility and Corrective Exercise Specialist), Focus on Flexibility and Periodization of Sports Massage workshops, As the director of education for Kettlebell Concepts, he authored the KBC Level 2 course called The KBC Metabolic and Neurologic Specialist Certificate (KBCMNS.)