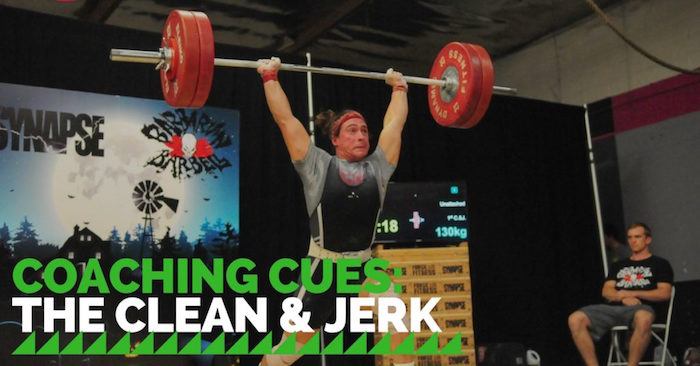 Start position – feet are placed in the jump position with the bar over the lower end of the laces. There is some debate as to the angle of the back, some coaches suggest that the start position should be similar to the deadlift with the first pull producing a more mechanically efficient vertical bar path. While other coaches advocate a more upright posture, minimizing torque at the hip and with the theory of eradicating early fatigue of the lumbar erectors, arguing that the muscles of the lower back become tired and so it will lose rigidity during the second pull and flexion is inevitable. Both techniques have shown great success and are advocated by various elite Olympic Weightlifting coaches.

This post gives instruction on performing the first variation. The body is set with the hips slightly higher than the knees. The head and neck are in line with the spine or tilted back slightly which will facilitate the spinal erectors. The lifter takes a large breath to fill the abdominal cavity with air and lifts the chest and sets the scaps, grasping the bar with an overhand grip.

When grasping the Olympic bar, care needs to be taken in order to not grasp the bar too tight as this will cause tension to travel all the way up the musculature of the arm. Excessive tension in the arm can impede a seamless transition from extension to flexion during the Clean and the same can also be said from flexion to extension during the Jerk due to the firing of the antagonist muscles. Advanced practitioners of the Olympic lifts have an effortless sequence of relaxation and tension of the muscles used.

The weight should be passing down through the balls of the feet and as the first pull is initiated the weight is shifted backwards towards the heels as the bar rises towards the knees.

The Clean & Jerk as with the other Olympic lifts is one of those lifts where becoming technically proficient comes from continuous repetition of practice. The ability to pull the bar comes from being able to generate force through the feet into the ground.

The lifter should aim for maximum acceleration from the onset. The first pull is very important and if done well the barbell’s own inertia will keep it moving vertically. As with any other lift, good form/technique is key, the first pull should be as fast as possible but not at the expense of good form. The greater the lifter’s starting strength the better the first pull. A slow first pull makes it very difficult to have an ‘explosive’ second pull and so therefore makes preparation for ‘receiving’ the bar very challenging.

Also called the ‘scoop’ or ‘double knee bend’, the second phrase is a very confusing term which causes some beginner lifters to incorrectly bend the knees twice.

The bar moves upwards, knees slide forwards and underneath the bar and the lifter has now moved into the power position. The speed that the knees shift under the bar is also essential in generating optimal height of the bar.

This is the most powerful phase of the clean, a vigorous triple extension followed by a shrug with the arms remaining straight until the end of the shrug. The bar doesn’t stop moving and the arms remain straight, at which point they will slightly bend and the elbows become high. When watching a high level lifter moving from the transition phase to the second pull the speed of the movement is so great that the bar almost appears to bounce off the thighs.

When the bar reaches the highest point the lifter enters the catch and rapidly get his/her body under the bar and repositions the feet to an overhead squat position. As he/she drops they rotate the wrists and the elbows move forwards and up with the bar resting on the anterior delts.

If the bar is caught around parallel the lifter can get a good bounce out of the bottom and so making good use of the Stretch Shortening Cycle (SSC) to increase power output. Rising in a standard front squat.

With the elbows high, there is a slight pause and a deep breath followed by a small controlled dip. Aggressive extension, throwing the head back helps to get more extension and moves the face away from the bar creating a clear straight path for the bar to now travel overhead. Failure to do so will mean the bar is a little forward and the lifter will have to quickly move forward to try and save the lift. Extension is so powerful that the feet leave the floor for a split second before the lifter drops down under the bar into a split stance with the arms fully extended. Once the arms are locked overhead if the lift was good the feet will usually return to level from a combination of the front foot moving back and the back foot moving forward. Effective use of the SSC is also key when performing the jerk component of the lift. The type of strength used when switching rapidly from the eccentric phase (bending the legs) to the concentric phase is ‘reactive strength’. The faster this switch from eccentric to concentric the higher the level of power produced.

Yas has been in the health & fitness industry since 1996 and has been a strength & conditioning coach since 2005. He has a BSc in Sports Performance (Hons) and many certifications in Strength & Conditioning, fitness and nutrition. Experience includes training trainers, royalty, executives and athletes from child to adult Olympic and professional. He did his degree at an Academy of Sports Excellence in the UK under the tutelage of Professor Ian Jeffries PhD which enabled him to not only gain academic knowledge but also the experience of working with elite athletes on a day to day basis while learning from world class coaches. In 2006 Yas flew to the Olympic Training Center in Colorado Springs to take USA Weightlifting’s ‘Sport Performance Coach’ certification.

He currently is lucky enough to travel the world teaching for the Poliquin Group.